DFS operates and maintains four facilities throughout the Commonwealth that are shared with the Department of Health’s Office of the Chief Medical Examiner (OCME). The Northern Laboratory in Manassas, which opened in 2009 as LEED Silver Certified, is the newest DFS facility.  The Eastern (Norfolk) and Western (Roanoke) Laboratories were originally constructed in the 1990s; however, both have been through a renovation/expansion project. The Central Laboratory in Richmond was constructed in the late 1990s, and DFS is in the process of a capital project to replace the laboratory and state departmental offices, which are currently housed in leased space across the street from the Central Laboratory.

Laboratory facilities are significant consumers of energy. In an effort to reduce energy consumption, DFS entered into an $11 million ‘Energy Performance Contract’ with Trane in December 2009 to make improvements in the Central, Eastern and Western Laboratories. Final project improvements were completed in December 2012. The contract and associated financing costs were funded entirely with the savings achieved through reduced energy consumption.

The capital project to build a new Central Laboratory to house both DFS and OCME operations is currently in the design stage. In December 2019, DFS purchased a 24-acre parcel of land in Hanover County for the new facility, which is approximately 10 miles north of the current laboratory and convenient to interstate highways.  Ground breaking is anticipated in late 2021 with a potential opening date in 2024. 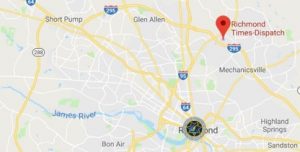 The Eastern Laboratory renovation/expansion, which was completed in 2014, provided additional laboratory space for the Controlled Substances and Toxicology Sections by expanding into the fifth floor of the facility.

Planning for the Western Laboratory project, which provided for renovation and expansion of space for both DFS and the Western OCME, began with the purchase of land adjacent to the building in 2009. The construction of the expansion began in the spring of 2014, and the official Ribbon Cutting Ceremony was held on September 26, 2016.  The $34 million project included a three-floor, 62,000 square-foot addition to the existing 54,000 square-foot building. Approximately 27,000 square feet of the existing building was also renovated. The new portion of the facility is also LEED Silver Certified.